The boys who never grew up 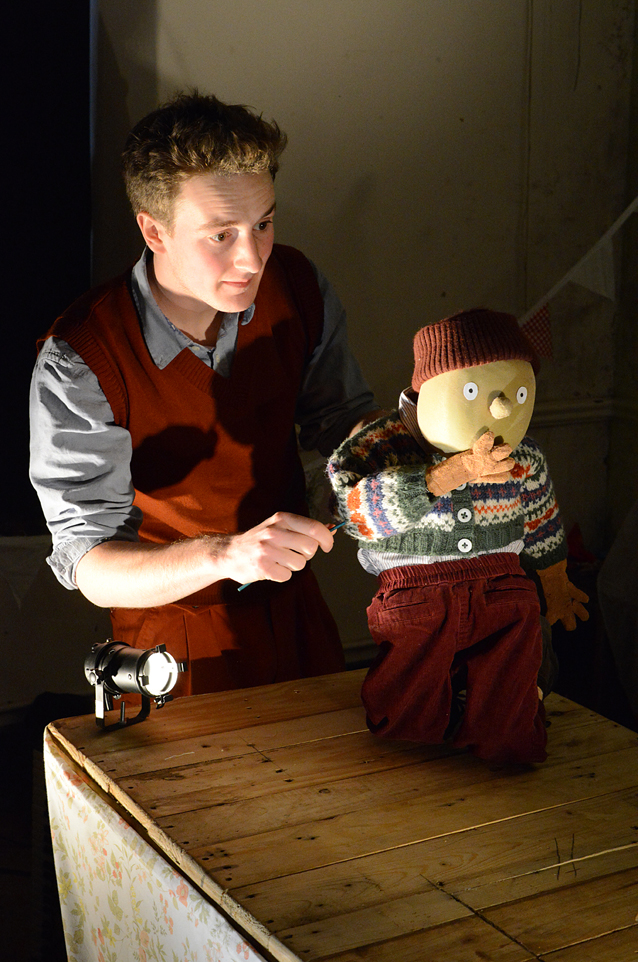 In the past, Cornwall has spawned some inspirational theatre projects, many of which have gone on to international acclaim. Miracle, Bash Street, Kneehigh are the names that we readily associate with the cutting edge of local theatre. But where is the fresh blood coming through? Young talent, in any field or profession, is continually lost to the county as young folk seek their fortune in the bright lights of Britain’s cultural hotspots – rarely do the gifted stay, or return while still fresh of face and bright of spirit.

However, we’ve spied one spark of hope locally in the form of Silly Boys who are Newlyn boy Callum Mitchell, 26, Seamas Carey, 19, and Alex Heane, also just 19. So you see, when we say ‘young’, we mean it, but the trio’s talent, vision and professionalism belies their tender years. 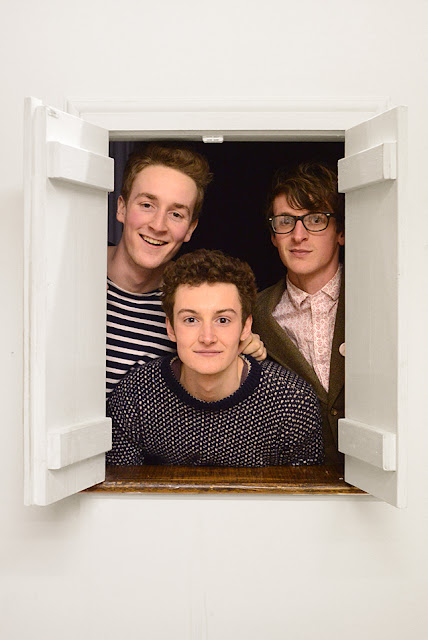 All three are the offspring of local artistic families – for example, Seamas’ father is one of the founders of Kneehigh – and, as such, they have been brought up within the crucible of Cornwall’s creative scene. And now, as they reach the age where they are able to make things happen for themselves, they see the real need for more homemade entertainment. They regard the general lack of local activity as an opportunity, rather than disheartening. And their shows are being snapped up, proving that local venues are hungry for new talent.

The setting up of Silly Boys in 2012 was a very natural process, and came to pass after the boys had been out in the world gaining invaluable experience; Callum working with Show and Tell in Edinburgh and Seamas touring Europe with Bash Street. And now, it seems, they are on a frenzied campaign to fill the county’s cultural void; as well as producing their own shows, they are also bringing other quality acts to our regional theatres. The boys have their fingers in many pies and their ideas for new projects are only limited by the speed at which they can realise them.

Instead of defining and honing one creative route, their shows are diverse in concept and style. This is partly due to appetite, but also because of the unique combination of the three young men; each has his own distinct personality, artistic talents and influences. Callum is the writer and the thinker – a dry-witted performance poet who wears his heart on his sleeve; Seamas is the musical prodigy and fountain of boundless creativity; and Alex is the stalwart musician and foil to the extreme character of his two partners.

As we talk to them, the creative chemistry between the three is tangible. While Callum will mull and then expound at length on a topic, the other two sit respectfully, until Seamas erupts with a funny anecdote that gets all three throwing around thoughts, jokes and stories, drifting off-point in a natural, outward spiralling of imagination. You can easily see how their creative process is fed by this joyful interactivity, and how their artistic journey won’t ever stick to the map. 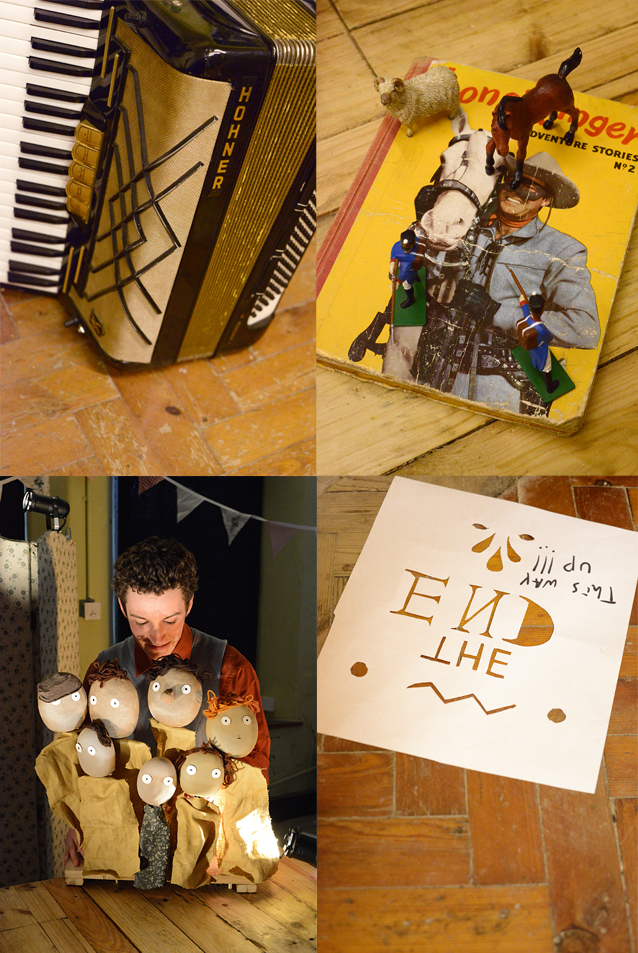 This purposeful aversion to uniformity means they are reluctant to pigeonhole their collective style, and they cite influences as contrasting as Buster Keaton and Woody Allen, and from Balkan gypsy jazz to rap. But if we are to be stubborn and seek a connecting theme, it is the unplanned, unhinged style of comedy accompanied by songs and music that characterises their work. From this we can draw lazy comparisons with the likes of The Flight of the Conchords and The Mighty Boosh, but unlike these established acts, the Silly Boys aren’t interested in defining set characters or boundaries for themselves, at least not yet.

Their philosophy is to create an edge through spontaneity; by never over-rehearsing they force improvisation, which is often the source of their best humour. And, partly through necessity, partly through choice, they tend to opt for the low budget option, where the charity shop becomes their props cupboard and friends and family become their crew. But what the finished product lacks in polish, the boys make up for in fresh ideas and energy, which they bring to each show by the bag load.

Lets’s look at their output to date. Firstly, we see Callum and Seamas take on their stand-up persona as Underdog, where spoken word and songs mingle in charmingly quirky and improvised comic ramblings, most recently seen at the The Lost and Found Cafe in Chapel Street. Then we see Seamas and Alex in The Silent Film Club, providing live music for classic silent movies in sell-out performances at The Poly in Falmouth. And this month all three take their children's puppet show, The Tallest Horse on Earth, on the road.

Puppetry is a skill none of the boys claimed to possess, but that’s just indicative of their fearlessness. Performing for children is also something they’ve never done before, but it appeared to be a type of theatre that was under-supplied. However, the boys are keen to explain that the show will also appeal to grown-ups with a penchant for the quirky.

The Tallest Horse on Earth starts its tour of small theatres and village halls on 15th April at Exeter’s Bike Shed, comes to The Centre, Newlyn on 20th April and hits St. Just WI Hall on 17th May. Book your tickets on the CRBO Box Office. 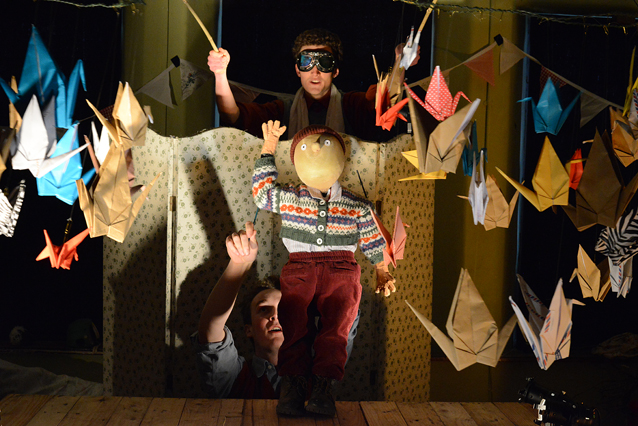 Their connections in the industry have also led them to act as the production company for the local shows of other artists. Recently, a capacity crowd at The Acorn Theatre welcomed Molly Naylor in her enchanting monologue performance of My Robot Heart. And on April 27th, Penzance will be treated to the comic musings of Rob Auton when he brings his Edinburgh Fringe 2012 hit The Yellow Show to The Ritz, supported by Underdog. Buy tickets (only £5) from The Lost and Found Cafe.

As you can see, it’s hard work being a Silly Boy; while their theatre can be outlandish and unpredictable, it’s matched by the seriousness of their ambition and dedication. And all their effort means that we get to enjoy high quality homegrown theatre productions on our doorstep. So if anyone bemoans the dearth of local live entertainment, just point them to anything that has the name Silly Boys attached to it.

Email ThisBlogThis!Share to TwitterShare to FacebookShare to Pinterest
Labels: Artistic Prowess, On Stage