At the tender age of 29, Cornish boy Sam Bassett recently hung his first main solo show, Torn Anima, which is on until 24th April at the Millennium Gallery in St.Ives. Not wanting to attempt to describe the work – we'd prefer that you take it at face value when you go – we'll just say that it's unexpected. Not what you'd normally get from a Cornish artist certainly; no boats, no cliffs, no sunsets and no seagulls. Amidst the chiming voices of the local art vernacular, Sam's work speaks a separate, distinctly singular, language. So, above all, we were interested to know how Sam viewed his place in the local art scene and its celebrated heritage. 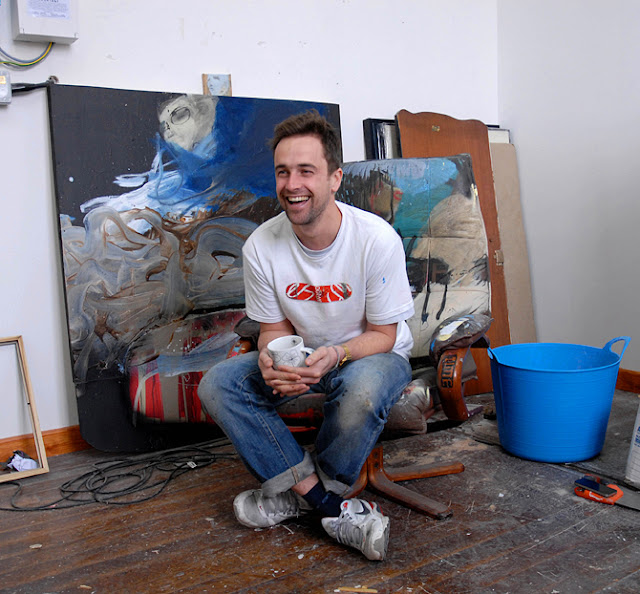 We visited Sam in his Newlyn home, where he has lived for just two years with his wife Sonya. The house, it turns out, belonged to a relative, many years ago. So for Sam, while having been born in St. Ives, buying this special place was a reclamation of his Newlyn roots. His grandfather was also a Newlyn man, and an early inspiration for the young artist. Sam recalls the occasions when his grandpa would buy him new art books, and hide them in the tumble dryer for the young boy to discover. Growing up in St. Ives, Sam was naturally exposed to the successful local painters of the time; visiting art shows of key figures like Terry Frost, Ben Nicholson, Bob Crossley, Roger Hilton and Breon O'Casey. While his current style appears to inhabit another place entirely, he readily admits that those people influenced the way he applies paint, uses materials and approaches his work. The craft of painting and construction of a piece is definitely Sam's thing. But this wasn't his initial calling: after taking an art foundation course at Falmouth, Sam studied Illustration at Bournemouth with a view to becoming a commercial illustrator in London. But he remembers that while other students would be finalising their work on the computer, he would still be hammering things together. It was his love of process that eventually led him to leave his stable career path and flee to the somewhat more unpredictable life of a fully-fledged artist. His early work did inspire him in one way: the layering technique that grew out of computer-based illustration would noticeably carry though into his painted art. Another reason why Sam pulled away from his original profession, was that he found clients and the projects restricting. As Sam neatly puts it: 'Commercial work has to be cautious – I don't like caution'. This is true; his last show, at the Cornwall Contemporary gallery, was a collaborative one, where artists were free to dismember each others work. Sam isn't afraid to play with taboos either, and his art could be seen as challenging to some. He has also dabbled in some pretty weird performance art, and he describes a film he made in which he is sailing a wardrobe, singing sea shanties and painting. 'It was great', he says, 'but then you think, who the **** wants to watch this?'


So why did the change of heart in his trade lead Sam home to Cornwall? Surely his illustrative style owed more to urban art than a rural environment. Sam says he doesn't really know where he fits. Fair enough, these days artists can collaborate and form groups over the internet, so the sense of place isn't quite as important as it was. Stanhope Forbes and the Newlyn artists flocked together because of light and to document a scenario and an industry. But Sam and his artist friends have more of an individualistic approach to art, process and themes, and as Sam explains quaintly: 'it's less of an outlook and more of an inlook'. In this respect, he says he could work anywhere, but is quick to point out that the local landscape always creeps in, embedded into the background. So Cornwall does inspire him. In fact, the colours he picks come from the scenery – but it's just not obvious to an onlooker. Local people too have a massive impact on his work; being all about memory and observation, Sam' artistic themes draw direct inspiration from the characters and personal relationships from his life here.

When Sam first came back, he had a show at Debbie Hall’s Orchard Gallery in St. Ives. He was surprised that they wanted to do something different. And locals appreciating and buying his work gave him confidence to think that people down here were up for new things, and he wasn't walking into a 'commercially-viable only' market. Sam loves that local galleries are pushing it. His view on the cultural scene is heartening: 'All I know is that in culture, music, art, whatever, you need diversity to be able to survive, otherwise things become boring. I'm happy to be in a town that can appeal to a good diversity of people'. Sam is clearly excited about the local art scene today: 'at the moment there's a great energy, with new studios and quite a few people creating – there's ongoing creativity here'. The show at Millennium was a specific ambition of Sam's. And with that under his belt, his next goal is to secure funding. This will enable him to push further with risky subjects and large experiments, and ultimately create a substantial body of work for a local public gallery. But he's also been contacted by galleries overseas, so Sam Basset may soon have a significantly wider audience. We asked him how he would label himself to a this international market, a Cornish artist? a Newlyn artist? He reiterated that art today is less about 'place', but he acknowledges his heritage, and his website proudly announces that he's a 'Cornish contemporary artist'. So other than some historical family ties, why did Sam choose Newlyn as his present home over St. Ives? 'It just feels a bit more real', he says. You can't argue with that.

Sam's age is part of his appeal as an artist, so it's interesting to hear that the Millennium's next subject will be Trevor Bell, who is 82 this year. Sam, who has just turned 30, is at the other end of the scale in terms of experience. It is another way in which he sits apart from the norm. He says he feels privileged to be recognised so early on in his career, but when we asked him if his youth is an integral part of his art, his answer was simple: 'I think I'll always have a young head'. He hopes age will bring a different pace – enabling him to slow down and make some iconic pieces, but he wants to stay spontaneous and prolific. But Sam is already changing. He hints that future work might be inspired by nature; as a child he was fascinated by wildlife and would draw birds for hours. So his sense of place may be stronger than he imagined after all.

Words © Dee and and Gerard Ivall. Images © Nik Strangelove
at 06:41